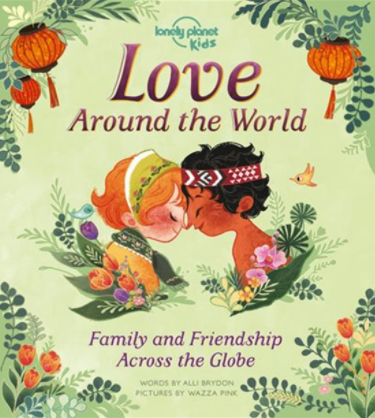 I read a variety of books this month, finishing off the Edgar Brim series and reading books about love traditions around the world, tiny creatures, poetry from women poets of the Harlem Renaissance and more.

Love Around the World, Family and Friendship Across the Globe

In this cute picture book by Alli Brydon with illustrations by Wazza Pink, we learn about customs and traditions of how people show each other love.

In Japan, for example, parents get up early to make the perfect obento, or as we know it here, bento boxes, for their children, although I confess this is one of my least favourite traditions as I feel it may be a case of one-upmanship and I am not all that interested in playing that game.

I do, however, love the idea of Walls of Kindness, which first appeared in the Iranian city of Mashhad in 2015. People leave clothing and other items for people in need. It’s a beautiful idea. In Mexico it’s a song, in Kenya it’s a wrap and in South Africa it’s a connection.

“In South Africa, the word ubuntu means we are all connected as people.”

Love Around the World is from Lonely Planet Kids and Raincoast Books ($22.99).

The Book of Tiny Creatures

While I find some tiny creatures fascinating, the ones with multiple legs that scurry in the dark do nothing for me. So, while I spend a fair bit of time reading the information in the book, there may have been a look of disgust on my face because while I do like worms and a grove snails, centipedes are nasty, spiders should stay where I can’t see them and wasps, while pollinators, still seem useless.

The book has lots of information from reproduction to growing and where they go in winter. There is also information on various types of tiny creatures from ones that fly, to those that stay close to the ground or in the water. There is also a section called world records such as the bootlace worm that if wasn’t twister up could stretch itself out to 100 feet. Remind me to avoid the North Sea.

The Book of Tiny Creatures is by Nathalie Tordjman and illustrated by Emmanuelle Tchoukriel and Julien Norwood. I will say the illustrations are pretty impressive – both cartoon in look and realistic, hence the look of disgust on my face.

The Book of Tiny creatures is from Raincoast Books and is $26.95.

My 12-year-old son and I just finished Demon, Book 3 in The Dark Missions of Edgar Brim series by Shane Peacock.

It was my least favourite of the three books. Spoiler alert if you haven’t read the first two books

In this book, Edgar Brim and his friends Lily, Lucy and Jonathan are facing the worst monster yet – the devil himself.  I found this book a bit too out there for me, either though the first two books talked about a vampire and Frankenstein’s monster. I found that more believable than what happened at the end of this one. However, Peacock did a great job of casting doubt – like Edgar I started to judge my sanity and couldn’t figure what was going on and who could and couldn’t be trusted, although I was a bit right.

There was a part on the stairs that had both my son and I laughing out loud.

I was going to kill this review. I have written it twice and showed two different people and in the end I wasn’t going to print it. But I can’t do that because the boys in girls featured in this book deserve to be highlighted for the amazing things they are doing to make their world a better place not just for themselves, but for everyone else as well.

We have Amoy a third grader from Georgia who loves science and who was recently a featured speaker at the Roadmap Scholars Neural Conference where she spoke about Alzheimer’s disease and is the youngest person to ever do so. Then there is Celai, from California, who, at 10, became the youngest professional runway model to walk in an adult lineup at the New York Fashion Week. Havana lives in Germany, the daughter of U.S. diplomats, who has fundraised more than $25,000 to donate black girl magic books to girls throughout the world.

The book itself is beautiful – full colour with beautiful photographs of each of the children with a one-page summary about their amazing accomplishments.

Almost everything about this book by Kahran and Regis Bethencourt is great – except one thing. One of the criteria for beauty in this book is based on something superficial – hair. I know black children have been told they are not beautiful, particularly if their hair is natural, and this breaks my heart. But what happens tomorrow if these children develop alopecia and their hair falls out completely or drops out in clumps here and there? Are these children no longer beautiful? Of course they are. They are beautiful by their actions, their words and their willingness to change the world.

To be honest, poetry is not my favourite media. I appreciate it for what it is, but it’s not something I would curl up on the couch and read for any length of time

I did, however, get about halfway through this book and enjoyed pieces of it. I loved the preface. In it, poet Nikki Grimes talks about how women have fallen out of historical records. We know Wolfgang Amadeus Mozart, but few are familiar with his equally gifted sister Maria Anna (I read a book about her so I am familiar). We know astronaut John Glenn, but without Katherine Johnson, Dorothy Vaughan, Mary Jackson and Christine Darden, he wouldn’t have gotten there at all.

“In these pages, you’ll meet some of the gifted female poets – and remarkable women – of the Harlem Renaissance who created alongside and often nurtured the male poets we know. They didn’t all produce poetry collections of their own, but each played an integral part in this historic era of America.”

Grimes also talks about the Harlem Renaissance, which I know now a bit about, and the Golden Shovel poetry where you “take a short poem in its entirety, or a line from the poem, called a striking line, and to create a new poem using the words from the original. Say you decide to use a single line: you would arrange that line, word by word, in the right margin.

In
The
Right
Margin.

In this book, you’ll read the original poem by one of the Harlem Renaissance poets, then read the new poem by Grimes. Each poem comes with a brightly coloured picture.

I am impressed by Grimes’ talent.

Legacy Women Poets of the Harlem Renaissance is from Raincoast Books and Bloomsbury . It costs $25.99.

A copy of these books were provided by Raincoast Books for an honest review. The opinions are my own.