Picture books that make you laugh, cry and shake your head 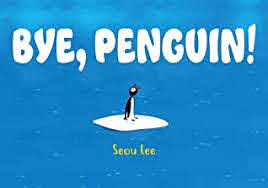 I read quite the collection of books this week. Many were great. Some were not. I think you’ll be able to tell my favourites!

For a book that had no words I certainly had a mix of emotions while reading it.

At first as I was sad. A poor little penguin was just about to swallow a fish when the piece of ice he is standing on breaks off from his group of other penguins and floats away. He is sad and alone. We watch as penguin floats throughout the ocean, his piece of ice getting smaller and smaller, through Brazil, Greece and Australia and until, finally, he meets a boy on a red surfboard. The look at each other.

I laughed so hard throughout the end of this book. Well done, Seou Lee.

Bye, Penguin is from Raincoast Books and Levine Querido and retails for $24.99.

Do you know how people find Robert Munsch’s book Love You Forever a bit creepy? I find Nancy Tillman’s latest Because Your Mine even more so. While the sentiments in this book are lovely – your child will always be yours regardless of how far he or she sails away, I found the lead up and the even the phrasing a bit…much. I wanted to be a mom for a long time before it happened and my guy is my guy but it seems a bit possessive in wording.

“The world may circle ‘round your head and wish that you were its instead but that can never, ever be…because you belong to me.”

If you have ever read a Tillman book, this one is similar in illustrations, which are always lovely – people with animals by their side. I always do love her illustrations.

Because Your Mine is from Raincoast Books and Feiwel and Friends and retails for $24.99.

A Little Red Sleigh sits in a store, dreaming of being Santa’s sleigh. Her fellow shopmates remind her she is too small, too slow and too young to be able to do that, but she is determined. So, she heads north, jumping on a steam engine and a yellow truck, both of which tell her it took determination, time and practice before they could do what they did now. The yellow truck gets stuck in the snow before Little Red Sleigh gets to the North Pole, but soon she is happy as children find her and she spends the day sledding down the hill.

Christmas morning arrives and Little Red Sleigh is disappointed she didn’t make it to the North Pole until she gets a note from Santa himself.

Little Red Sleigh by Erin Guendelsberger is a lovely story about determination, following your dreams and the importance for kindness. The illustrations by Elizaveta Tretyakova are beautiful. The book is from Raincoast Books and Sourcebooks Wonderland and retails for $24.99.

The Little War Cat by Hiba Noor Khan made me cry.

The book is set in Aleppo, Syria, after civil wars comes to this former beautiful city. We meet a little grey cat who is scared and alone, running away from the humans in big boots who make loud noises and have chased away the baker and cheesemaker. Eventually, she hears a man with a kind and gentle voice and she follows him home to find hundreds of other cats. Fearful, the man coaxes her out, feeding her fish and she eventually because playful. One day she spots a blue shoe and sees a little boy hiding under the table. She does her cat magic, winding herself around the boy’s legs and curls up on his lap.

The story is beautiful and so are the illustrations, but it’s the author’s note that got me.

“I was inspired to write this story by Mohammad Alaa Aljaleel, from Syria.”  Khan writes when everyone else fled for safety, Aljaleel stayed behind to take care of people who were injured. He set up a sanctuary for cats, eventually earning himself the nickname of ‘The Cat Man of Aleppo.’ “Adults and children come to the sanctuary to help and play.”

The author dedicates her story to the “millions of children and animals affected by wars, every year, all over the world.”

The Little War Cat is from PGC Books and retails for $28.03.

Gus doesn’t like Christmas. He dislikes mistletoe and snow and snowdogs, but then Gus remembers there is a little pup inside who is excited for the season and maybe Christmas isn’t just about him. From then on Gus embraces all about Christmas until a new arrival comes in.

Merry Christmas Gus by Chris Chatterton is a cute book with big and bright illustrations.

Merry Christmas Gus is from PGC Books and MacMillan and retails for $26.99.

I am not sure what I was expecting for this chapter book, but this wasn’t it.

Dumpster Dog and his friend Flat Cat are homeless and are looking for a special flea collar and a bicycle pump for Christmas. The pair also want to spend Christmas at a home with an owner, which is when they meet what they think are going to be a nice family (after all, there is a sign on the door that says it’s always Christmas), but instead find two of the most awful children you ever meet. The children try to give each other the worst Christmas presents – the sister giving the brother Dumpster Dog and Flat Cat – and the brother giving the sister a doll without arms, which we find out was stolen from a homeless girl.

There is more, but it’s equally awfully and by the end of the book I wondered way I bothered to read it. It never got better.

Merry Christmas, Dumpster Dog is by Colas Gutman and is from PGC Books and retails for $13.50.

The Old Man and the Penguin

The Old Man and the Penguin is the true story of Joao Pereira de Souza, who, in 2011, found a penguin soaked in oil and close to the death. The man cleaned the oil off the penguin and returned him to the ocean where the penguin didn’t want to return.

In the story we watch as Joao and the Magellanic penguin he names Dindim form a close bond. They cuddle. The eat and swim together. Then one day, nature calls and Dindim returns to the ocean returning every year at the same time, spending eight months on land, being cared for by Joao.

What a beautiful and amazing story.

I like in Julie Abery’s author’s note she talks about the dangerous of oil spills to both humans and animals and she reminds us if we ever find an oil-soaked creature we need to call a local wildlife rescue organization.

The Old Man and the Penguin is from Kids Can Press and retails for $19.99.

Grandpa Elf is reading a story to his grandson Yo-Yo about how toys used to be delivered by Santa in his big read sled pulled by his flying reindeer. Unfortunately, Santa’s operation is automated (santa.com) and Santa himself is no longer there. But then the website gets hacked by Cyber Scrooge and Christmas is ruined. Until Yo-Yo has an idea to find Santa and go back to delivering toys the old-fashioned way.

We learn that Santa stopped delivering toys because he made one huge mistake – he gave a child a doll rather than a chemistry set like she asked and now Suzie has become Cyber Scrooge to ruin Christmas for everyone else.

What sort of lessons are we teaching kids in this book? If you don’t get what you want, you should try to ruin the magic of the holiday for everyone else? Santa is delivering you a gift. If you don’t like it and were expecting something else, too bad, it’s the thought that count. And Santa makes a mistake – one mistake – and gives up completely, shuts down his operation and goes digital?  I think the authors may have missed the point of Christmas. The illustrations are nice though.

This book by A.K. Riley is dedicated to snow and the joy of it – ponds lathering up with snow, hills are capped with them and children dawdle in it, dreaming of snow and likely all they can do in it.

I like snow – until March and then it can go away. This book is a good reminder for parents to remember that kids love snow and the magic of it even if we just want to be warm.

A copy of these books were provided by Kids Can Press, PGC Books
and Raincoast Books for an honest review. The opinions are my own.