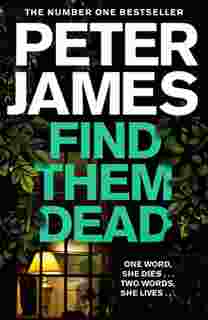 If we are looking for two different books, Peter James’ Find Them Dead and Jef Aerts’ The Blue Wings are as different as you can get.

As mentioned in my last blog post, I have two books going on at any one time – one I am reading for myself and the second I read to my 12-year-old son.

I have never read a book by Peter James before. I quite enjoyed it. It was a quick read, the action moved moved fast and I finished the book over the course of the weekend.

In Find Them Dead, Meg Magellan finally feels like her life is getting back on track five years after her husband and teenage son were killed in a car crash that also injured her and her daughter. Meg is selected to sit on a jury trial for a drug dealer. One night, Meg comes home to find a picture of her daughter – travelling through Ecuador during her gap year – on her counter. Her phone rings and the man on the other end said unless she can she can get the jury to find the man not guilty, she will never see her daughter alive again.

The book switches between what Meg is going through and what police officer Roy Grace is doing – trying to find the person responsible for a murder.

This is the 16th book Roy Grace has appeared in. Despite that, I never felt like I was missing something or that I didn’t understand his character. He was a good person, who tries to do what is right. Meg was also a great character, and certainly don’t envy her position. I am not sure I would have been able to do anything differently.

What I didn’t like was the ending. On one hand I thought the story wrapped up a little too easily. However, there was one thing I would have liked to see expanded or at least hoped we would have read more about it. But perhaps we will see more of Meg and her situation in future James’ books.

Peter James’ Find Them Dead is from PCG Books and Pan MacMillan and retails for $25.99.

The Blue Wings was a beautiful story about two brothers, 16-year-old Jadran, who his family affectionately nicknames Giant, and Josh, five years younger but who takes care of his older brother who thinks and acts like someone much younger. When we meet the pair, Murad and his daughter Yasmin moves in with Jadran, Josh and his mom, and there are issues between the children trying to adapt to their new blended family.

When Jadran finds a young crane that is left behind by its family because it’s injured, he brings it home, takes care of it and attempts to teach it to fly.

An incident occurs and Jadran’s counsellor convinces his mom that it’s time for her son to move permanently to a home for boys just like Jadran. But Jadran has other ideas, and the two boys begin an adventure.

The Blue Wings was another fast read. We read it in about a week. At the beginning I found Yasmin mean, but as the book progressed you could see, much like Jadran and Josh, she was trying hard to find a new way. She was also put in a terrible position.

The relationship between Josh and Jadran was lovely, although it’s also sad. It seems unfortunate the 11 year old was the one to be put in charge of his older, bigger brother.

The adventure was great. We enjoyed that part except for one part, which can’t be talked about for spoilers. I loved the ending.

A copy of these books are courtesy of PGC Books and Raincoast Books
for an honest review. The opinions are my own.