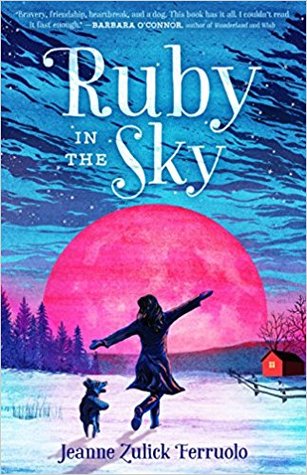 Human trafficking; civil war and poaching; and standing up for others and for yourself even when it’s hard – I read three books this month that tackled some serious topics.

Ruby in the Sky

Ruby in the Sky by Jeanne Zulick Ferruolo features 12-year-old Ruby Moon Hayes, who moves to Vermont with her mom. Her goal is to stay invisible like she has since her dad disappeared. Disappearing is even more important since her mom was arrested after standing up for herself on the first day of her new job.

“But keeping to herself isn’t easy when Ahmad Saleem, a Syrian refugee in her class decides he is her new best friend. Or when she meets ‘the Bird Lady,’ a recluse named Abigail who lives in a ramshackle shed near Ruby’s house…Ruby is forced to make a choice: break her silence or risk losing everything she loves. Ruby’s story is about the walls we hide behind and the magic that can happen when we’re brave enough to break free.”

Ruby in the Sky was a quick read – I read it in a day – with characters I enjoyed getting to know. I loved the idea of the Wax Museum project, although, like Ruby the thought of actually presenting makes my throat close up. I liked Ahmad, particularly his kindness to Ruby and his unwillingness to change – for the kids in his class and Ruby herself when she does something he knows to be wrong. I would have actually liked to got to know Ahmad a bit better.

I loved Abigail and how much knowledge she passed on to Ruby. I liked the pace of the story and the I loved the ending. I may have cried. A fair bit. My only suggestion is the the author should have offered the recipe for Ahmad’s uncle’s Game Changer hot chocolate. It sounds amazing.

Ruby in the Sky is $20.99 (Raincoast Books, Farrar Straus Girioux)

The Invisible Boy, by Alyssa Hollingsworth with art by Deborah Lee, shares Nadia Quick’s story. Nadia looks for adventures in the pages of her comic books, hoping to become the next Lois Lane. She hopes to uncover the secret identity of the superhero in her neighbourhood, who swooped in to save her dog, Wonder, from drowning and then promptly disappeared. No one has ever seen him, including the neighbour who has received random acts of kindness from the mysterious stranger. She is also hoping to avoid the neighbourhood supervillian, a boy she nicknamed Paddle Boy on the account of him breaking the paddle of her canoe “on purpose”.

“But the real-life adventure she finds is far more dangerous than anything in her comic books.”

I read this book to my 11-year-old son, who liked it before I did. I found the book slow at the beginning. Once it picked up, I didn’t want to stop and I found myself wanting to read it until it ended. There was a whole lot going on in this book with so many side stories that eventually pulled itself together.

Both my son and I found Nadia’s love of comic books, and Lois Lane in particular, a bit annoying with my son shouting out – “Life is more than comic books” (ha) at one point. I feel very un-Canadian, but Superman was never my favourite superhero and despite being a journalist myself, I never wanted to be Lois Lane.

I guessed one thing and I turned out to be wrong, but I did guess the more awful aspect correctly (abuse) – although not entirely (human trafficking). We didn’t like some of the choices Nadia made and we didn’t like how she treated Paddle Boy, whose real name is Kenny.

I was horrified as Nadia about the surprise her parents gave her as well as the entire blogging situation. My son didn’t like the comic strip that started each chapter, although he isn’t really a comic book fan. I found it gave away the upcoming chapter.

I thought Hollingsworth did a great job about bringing the issue of human trafficking to our middle grade kids by showing a child their age could be a victim of it. I found the epilogue/article an interesting way to offer more information about human trafficking, how common a problem it is in North America, what it looks like and the importance of speaking up.

My son and I had a lot of discussions surrounding abuse, neglect, fear and how Canada isn’t immune to this problem.

The World on Either Side

The World on Either Side, a young adult book by Diane Terrana, is another read that has a lot going on.

Valentine hasn’t left her room in more than a month, not since her boyfriend was killed at a football game by an opposing player. As a way for her daughter to recover, Valentine’s mother takes the pair of them on a trek in Thailand.

Valentine discovers houses on stilts and elephants that roam wild. “She learns about the Burmese civil war and the relentless violence against the Karen and Rohingya people. Then she meets Lin, a mysterious young elephant keeper tormented by his hidden past, and an orphaned elephant calf, pursued by violent poachers.”

Valentine, Lin and the calf they name Mohawk flee into the jungle “looking for refuge and redemption.”

There is truly some horrific moments in the book including the murder of a small herd of female elephants killed by poachers, which sets off the story. According to the book, a herd may be killed so the poachers can steal the babies and raise them to be friendly to humans as part of the tourist trade. The entire civil war issue is also awful, and highlights another part in history I didn’t know. We get to know Lin’s past within the book. Valentine, who grew up in Toronto, has a hard time understanding that Lin’s decisions weren’t a matter of choice.

The World on Either Side was a fast read – another day’s read – with amazing characters (including the other participants on the hike. In fact, I would like to read the book that features the cousins). It is another book that makes important issues accessible.

The World on Either Side is $14.95 and is by Orca Book Publishers.

A copy of these books were provided by Orca Book Publishers and Raincoast Books for an honest review. The opinions are my own.