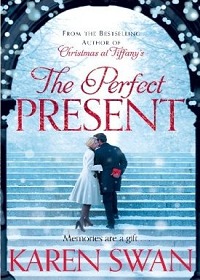 Readers of Book Time know I am a fan of Christmas and once December comes I start read the same books each year. I have already read two Richard Paul Evans‘ titles (Promise Me and Mistletoe Promise) and have several more to go from that author and various others. For the last couple of years, thanks to PGC Books, I have read a Karen Swan title.

Recently, I picked up one of her older titles and I quite enjoyed it.

The Christmas Present is about a woman named Laura who has a past that haunts her. She says she just wants to lead a quiet life with her boyfriend, Jack, their dog, Arthur, and her best friend, Fee, creating custom-made jewellery. As that business takes off, she is approached by Rob Blake, who wants commission her to make a necklace for his wife, Cat, made in charms – one representing each of the important people in her life.

Laura interviews each of the people in Cat’s glamorous life, spending a weekend in Verbier with the friends.

“By the time she has to identify the final charm, Laura’s metamorphosis is almost complete. But the last story left to tell has the power to change all their lives forever, and Laura is forced to choose between who she really is and who it is she wants to be.”

The Christmas Present was an interesting read. I never guessed Laura’s secret until the author told me at the end and then, suddenly it made sense, although I hope to never have to find out if it would have been the choice I made. Saying that, some of the choices Laura makes along the way wouldn’t have been the ones I have made.

The characters were great and while you really got to know Laura, the secondary characters – and in this case there were a lot of them – were fully developed as well. I didn’t really like Cat, but thought Kitty, a friend, was great.

And of course, there is a happy ending. Perfect for a Christmas read.

The Girl Who Saved Christmas

I read The Boy Called Christmas – twice – when it came out in November 2016. I try to find a new Christmas read each year and picked up The Girl Who Saved Christmas as both my son and I liked the first story.

Otherwise, it was an enjoyable read about the girl, Amelia, who first gave Santa and the reindeer the magic to fly around the world to deliver presents to boys and girls. But when her mother dies and she is forced into Mr. Creeper’s workhouse, Amelia begins to loose hope and Santa realizes in order to save Christmas, he has to find Amelia and restore her hope.

I enjoyed this book. I liked that we got to meet author Charles Dickens, and perhaps learn the inspiration for Ebeneezer Scrooge, Queen Victoria and Prince Edward (and their relationship and learn more about Santa and his magic. Then there is the message of hope and the importance of it in the lives of children every where.

One thought on “Christmas reads new and old”