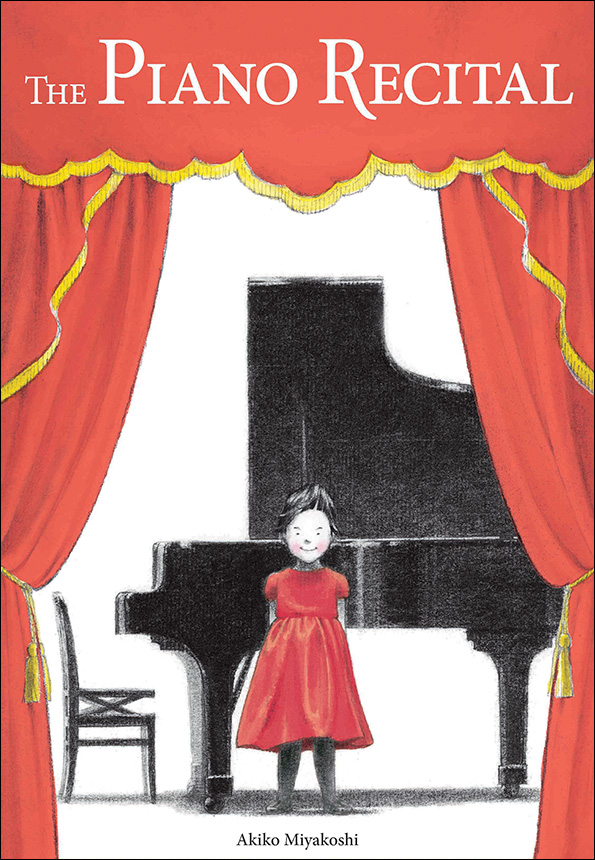 Akiko Miyakoshi has a new picture book out this month and it’s as wonderful as the other two I have read by this Tokyo, Japan, based author/illustrator.

It’s Momo’s first piano recital and she is nervously waiting for her turn to take the stage when a mouseling appears at her side and suggests she come to their performance first. Momo follows the mouseling through a small door, which magically transports her to a recital hall where mice are performing. She then helps mouseling who is nervous about her own performances.

Mikakoshi’s work is beautifully imaginative. I love that she uses black and white with only a hint of colour. I love that when you step through, in this case, a doorway, you magically appear in a world different, but similar to your own.

The Piano Recital ($18.99, Kids Can Press) reminds me of the first book I read by Miyakoshi, The Tea Party in the Woods, which is one of my favourites.

And then the Seed grew

And then the Seed grew ($18.99, Kids Can Press) is by Marianne Dubuc, whose work I also like. This one reminds me of the Montreal, Quebec, author/illustrator’s book Mr. Postmouse’s Rounds. In this one, a garden full of creatures both above (Mr. Gnome and little Jack) and below (Yvonne the Mole, the field mouse family, Paulie the earthworm and Colette the ant) are disturbed when a seed falls to the ground and takes root. Everyone’s lives are disrupted as the plant grows bigger and bigger until finally, residents band together to get rid of of the plant once and for all.

There is lots to look at in And then the Seed grew, particularly underground as each creature has a home and plenty of decorations. The pictures are bright and colourful.

In this first book of position words by R.D. Ornot (illustrated by Sakshi Mangal), Bear, Fox and Owl are playing hide-and-seek in the park. Fox counts to 10 and then tries to find bear outside the castle before finding him inside the castle and giving him a giant hug. Each of the friends take turn hiding and seeking.

Hide-and-Seek ($18.99, Kids Can Press) is a fun way to teach little ones about positional prepositions, while making the read fun for parents as well.

Listen by Holly M. McGhee ($23.50, Raincoast Books, Roaring Brook Press mackids.com) encourages children to listen, look and breathe the world around them, which is for them, but everyone else who calls this Earth home. The book reminds us that we each have a story if we listen.

It’s a great lesson, although I always wonder if the children listening to this story would understand what it is trying to say.

Mr. Russet (ha!) is the first person to see the potato in the middle of the couch. He notices it after getting his kids ready for school and seeing his wife off to work. But Mr. Russet is tired of picking up after everyone and leaves the potato where it sits in the middle of the couch. He also refuses to touch anything in the room even after losing his hairbrush and running out of coffee cups. Until one day, Mr. Russet can’t take it any longer.

The book was a funny little read. I like that it was the dad who stayed home with the children while his wife went off to work and it was the dad who complained of cleaning up everyone’s mess. I didn’t like the fact that the wife worked all day and came home and immediately put her feet up to read the paper. I wouldn’t have liked if the “working” dad did the same. I thought the end was a little gross particularly if you read the middle.

The Couch Potato by Kerry Lyn Sparrow is $18.99 and available through Kids Can Press.

A copy of these books were provided by Kids Can Press and Raincoast Books for an honest review. The opinions are my own.