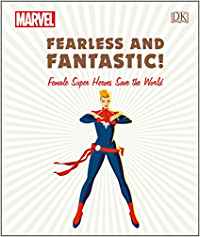 Saying I am a bit behind in the world of Marvel would be a vast understatement: while I read comic books when I was younger, I haven’t read them in years and most of the characters found in Fearless and Fantastic, Female Super Heroes Save the World ($21.99, DK) were new to me.

While some of my favourites are in the book – Rogue, Jean Grey and Kitty Pride – there were a number of characters I hadn’t heard of before including all of the women with spider-web capabilities.

The book is divided into qualities of the superhero women – determined, daring, compassionate and curious – with each character being placed into the category that offers a good example of that strength.

Each character is explained – how she got her powers or skills, her team affiliation and battles taken part in. The characters also comes with a list of friends, allies and role models, with the page numbers they are found on.

People are often critical about comic books, but what Fearless and Fantastic, Female Super Heroes Save the World shows are some powerful, diverse women who don’t do what is easy, but what is right.

A great book to prove women can do anything.

A copy of this book was provided by DK for an honest review. The opinions are my own.

DK will be at FanExpo Canada Aug. 22 to 25 at the Metro Toronto Convention Centre. Visit https://www.fanexpocanada.com for details.